Zhondra Wysiwyg, known as Zondra to both her friends and her enemies (erm ex-boyfriends) is the leader of the Latex Babes of Estros.[1]

Zondra is not Cornucopia Agricorp, but may be one of her more beautiful clones. She is the hereditary leader of the Latex Babes of Estros. She was once or will be intimately involved with Roger Wilco at some point between the Space Quest 5 and the Space Quest 10 eras. She let him conquer his affection, win her hand, and do with her as he pleased. They were to the point that they were almost married. They planned to spend eternity together, riding the spaceways, righting wrongs, eating in the best restaurants, and greeting each new dawn in exhausted bliss. They once meant much to each other. They pledged their love to each other with tattoos.

Roger dumped her, without her permission, he never called or wrote back to her. Roger even went even as far as leaving Zondra at the altar in a future game, and her people never forget a grudge.[2]

It is unclear how the SQ10 era's Roger involvement with Zondra took place (especially since he seems well involved with Beatrice Wankmeister by the time of SQ6, and Beatrice is a formidably jealous woman). The data entry for Latex Babes suggests that Roger Wilco was a two-timing janitor (and Latex Babes dislike two-timing janitors). Which means they have apparently already met by the time of Space Quest 6 (...Roger was cheating on Beatrice). This is not particurarly outside of Roger's character as there are rumors that he also dated Stellar Santiago while still involved with Beatrice as well (this continued until well after SQ6). It can also be gleaned that some point between SQ6 and SQX (possibly around SQ9, or during SQX just before time traveling Roger ended up on Estros) that Roger left her at the altar (likely making sure he married Beatrice instead).

After stealing a Timepod and escaping from the Space Quest 12 era during the Space Quest 4 game, Roger ended up on Estros in the SQ10 era. There he was accosted by Zondra and her Latex Babes. Zondra was extremely angry at Roger for running out on her, and complained that Roger claimed he couldn't be tied down and had to be free to roam the galaxy. The SQ4 era Roger, of course, was completely baffled by this, since at that point he had never met Zondra before.

Zondra forced Roger into her sub at gunpoint, and brought him back to the Latex Babes' Underwater Fortress to exact her revenge. There she strapped Roger into a restraining chair, and bid her cohort Thoreen to torture Roger.

However, before the torture could commence, the fortress was attacked by a sea slug, and the Latex Babes ran off. Roger was left behind, but managed to escape the restraining chair and kill the sea slug.

The Latex Babes returned, and Zondra was so thankful to Roger for saving her that she forgave him for running out on her and decided to let him go. Zondra decided to celebrate by going shopping, and took Roger with her and her cohorts in her pink hoverconvertible to the Galaxy Galleria. Zondra and the Latex Babes then ran off to shop, leaving Roger on his own once again. Zondra did however accidentally drop her ATM card, which Roger, after obtaining a disguise to resemble Zondra, used to steal enough buckazoids to buy a PocketPal connector for his PocketPal.

Her surname Wysiwyg is a computer acronym for "What you see is what you get". It refers to user interface but here it is perhaps used as a double entendre because of Zhondra's sexy attire.

"You've got a lot of nerve coming back here, Roger Wilco."

"After leaving me the way you did? You male scum!"

"This is the last woman you'll ever dump on. Right, girls?"

"Said you couldn't be tied down."

"You said ya had to be free to roam the galaxy."

"You'll be sorrier than you look, we'll see to that."

"This is Zondra. We are approaching Checkpoint Six. Prepare to open the tunnel door."

"Shut up! Your whimpering sickens me."

"Thoreen is quite knowledgable in the ways of torture."

"I'll let the two of you get acquainted. Thoreen, do your stuff."

"Well, Rog... I guess we can call it even. Thank you for ridding our fortress of that slimy, awful sea slug."

"I, uh... I know I can't blame you for backing out at the last minute. I guess I was a little overbearing. Sorry. Can we still be good friends?"

"No, Roger, you were right. You don't need to spare my feelings. It just wasn't meant to be. It's better this way." 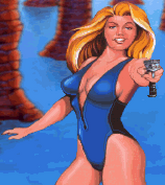 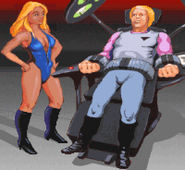 Zondra prepares Roger for Thoreen's torture.
Add a photo to this gallery

Retrieved from "https://spacequest.fandom.com/wiki/Zhondra_Wysiwyg?oldid=32785"
Community content is available under CC-BY-SA unless otherwise noted.