A member of the Latex Babes of Estros, she was a former preschool teacher, dental assistant, and in semiretirement as the official torturer for the State of Estros. Thoreen is one of the prime henchwomen of Zondra (the Latex Babes' leader). She is skilled at the art of torture, with her favorite tool being a leg hair shaver capable of taking a man's legs clean off.

While visiting Estros in timesector Space Quest 10, Roger was captured by the Latex Babes. Because of a previously unknown jilting of Zondra by Roger, he was strapped to a chair and threatened with torture. Thoreen had the job of torturer, a job she seemed to relish - especially when she threatened to shave Roger's legs off.

Fortunately Roger managed to escape with his legs intact by saving the Latex Babes when their base was attacked by an Estrosian Sea Slug.

"Let me introduce you to a friend of mine."

"This is EpiRip 357, the most powerful hand hair remover in the universe, and it's capable of shaving your legs clean off."

"I've always wanted to see a man shave with one of these... but I guess you'll do."

"Now you'll know the meaning of the word 'pain'." 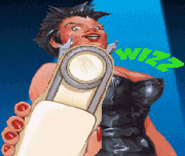 Thoreen looks in shock as a sea slug makes its presence known.
Add a photo to this gallery
Retrieved from "https://spacequest.fandom.com/wiki/Thoreen?oldid=28570"
Community content is available under CC-BY-SA unless otherwise noted.