Grell is a term used for at least three different species of creatures native to Kerona (and depending on time sector).

The third species which is extinct also appears, to be another name for the gigundasaurus Doug-o-saurus (this longer name is perhaps its scientific name, while the Doug-o-saurus maybe the given name for the specific remains found in the desert) a second reptilian species. The smaller reptilian grell may be evolved from the extinct gigundasaurus variety. Known information seems to suggest that this third species was much larger than the other two, and sentient, and possibly had its own culture and ruins. It went extinct eons ago.

Grell also appears to be the given name for an individual which represents his type of sandworm. The Grell is used as a way of getting rid of deadbeats by inhabitants of Ulence Flat. Those who don't pay are fed to Grell.

The word 'Grell' appears to originate from Keronian language (or rather its the rough conversion of the name into English/Xenonian dialects), but its unknown if its meaning has ever been translated into English or Xenonian dialect. The average Keronian refers to the specific individual Grell that lives near their underground civilization (be it the annelid or the reptilian variety depending on the time sector) but refers to the rest as the sandworms of Kerona. An understanding of its meaning may offer an idea why it has been used to describe a variety of creatures from the planet (perhaps it translates into something as descriptive as 'Dangerous' or 'Enemy' or 'Monster'). It may never be known.

The change between annelid to reptilian sandworms appears to be a paradoxal side affect of the time travel by Roger Wilco or perhaps even deliberate interference with time by Sludge Vohaul as another of his petty revenge plots.

Products Harvested From or Named after GrellEdit

Grell lard is apparently extracted from the grell. Xenon Army Knives are said to blunt to cut through rancid grell lard.

Grellhair spaghetti is one of Steller Santiago's favorite foods. Roger is said to have once hung out in the sandy outback of Kerona, roasting grellburgers over a lit rocket nozzle. It's not exactly clear where Grellhair pasta comes from as Grell do not appear to have hair (its possible that the extinct variety did, but this is unknown). However being pasta, it is not necessarily made from Grellhair (just as Angelhair pasta is not made from angels), and is also likely replicated from the Restaurant Universe. However, it does seem to still imply that some species of Grell may have hair, maybe there is a 4th species (or females have hair).

At one time many eons ago, Grell were the primary inhabitants of Kerona. Artifacts and ruins have revealed much about them: they were creatures of immense size, towering some 30 to 40 meters tall.

They were extremely ugly and couldn't bear to look at one another, which is why their race died out entirely. They were hunter/gatherers, preferring hunting gatherers to gathering hunters. 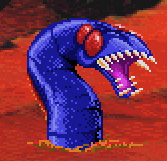 Add a photo to this gallery

In SQ1EGA, it is stated that Grell is apparently the name of a singular being, a 'him'. It talks about him and his kind. This suggests that there is Grell and there is 'sandworm' species which he is part of.[1]

SQ6 suggests that is the name of its entire species (but this species appears to be oddly sentient, apparently having its own culture). It might actually be describing the Gigundasaurus.

The Space Quest companion suggests there are lots of them still around, but they are not much more than five meters long.


Cite error: <ref> tags exist, but no <references/> tag was found
Retrieved from "https://spacequest.fandom.com/wiki/Grell?oldid=32807"
Community content is available under CC-BY-SA unless otherwise noted.