Space Quest Omnipedia
Register
Don't have an account?
Sign In
Advertisement
in: Behind the scenes, Facts, Locales, SQ6 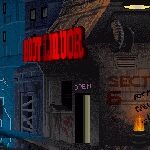 Seedy liquor store operated by Pa Conshohocken. The store is known to have the best Coldsorian Brandy within 20 light years of Polysorbate LX, as well as various other drinks.

The name of the store is phonetically equal to "Boot licker".

It may also refer to bootlegging - smuggling of illicit goods, originally used in reference to alcohol smuggling. E.T. appears in the store as an apparent victim of the "telecommunications wars". Points are awarded for touching his finger several times until Roger pulls his finger.

Community content is available under CC-BY-SA unless otherwise noted.
Advertisement