Space Quest Omnipedia
Register
Don't have an account?
Sign In
Advertisement
in: Audio, Behind the scenes, This article contains images or content that originated from Spacequest.net,
and 3 more

Astro Chicken is a phenomenally popular arcade game developed by ScumSoft (specifically the Two Guys From Andromeda) dramatizing the flight of a chicken. Its success allowed it to be followed up with Ms. Astro Chicken. This arcade game is licensed for use in Monolith Burgers across the Galaxy.

He's depending on you to bring him to safety!

Feed: Don't use up all your feed!

Hit the landing pad too fast and you'll bounce back up.

Landing outside the landing pad is fatal.

If you fly too high you'll bounce off the atmosphere and plummet back to the surface.

The Two Guys from Andromeda embedded a secret message into the ending of Astro Chicken. Roger Wilco decoded it with a Decoder ring from his Monolith Burger Fun Meal. 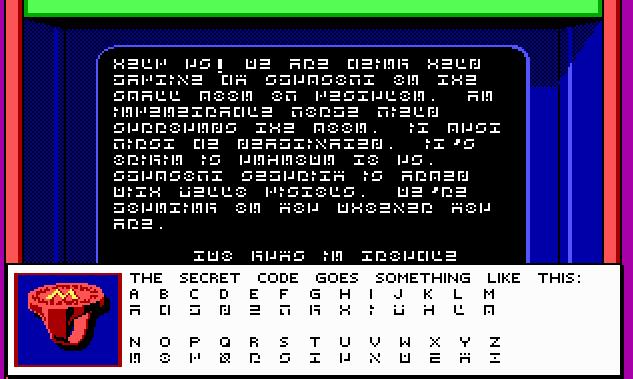 Help us! We are being held captive by ScumSoft on the small moon of Pestulon. An impenetrable force field surrounds the moon. It must first be deactivated. Its origin is unknown to us. ScumSoft security is armed with Jello Pistols. We're counting on you whoever you are.

Astro Chicken is played in a similar fashion to arcade classic Lunar Lander.

The theme song for Astro Chicken is a looped sequence from classic music piece "Chicken Reel" (the music also can be heard in Police Quest 1 when Dooley finds the chicken on the desk).

It's not actually known when the Two Guys were kidnapped, in relation to when Roger found them. According to SQ3 manual they were kidnapped after he escaped the Asteroid Fortress, and had been in suspended animation for indeterminable amount of time. It seems they would at least had to have enough time to make Astro Chicken for Elmo Pug (or at least retool the game). An ad in Galactic Inquirer might suggest they had been there for a few years. Alternatively it might imply they learned their education through the ScumSoft School of Game Design, before they hired elsewhere, and then after finding success then kidnapped again. At least within The Official Guide To Roger Wilco's Space Adventures Astro Chicken had been out since Roger had been working Xenon Orbital Station 4, and he became a very good player, the best Astro Chicken player around. In this timeline, only a few months had passed since he escaped Labion.[1][2] This of course does appear to be a discrepancy due to the fact that SQ3 manual states that the two guys were kidnapped 'after' Roger went into suspended animation, some time after SQ2, but before Roger woke up again. Of course ScumSoft are software pirates they might just as well stole an already successful games and then produced some bootleg cabinets which they distributed around to various places. These having had the coded messages embedded in them.

Community content is available under CC-BY-SA unless otherwise noted.
Advertisement